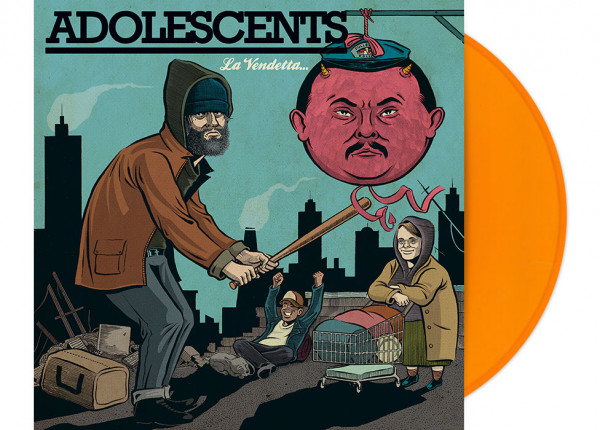 ADOLESCENTS are one of America’s most popular punk bands. They were formed by original AGENT ORANGE bassist Steve Soto and singer Tony Cadena /Reflex in 1979 in Fullerton, California. Along the way they recruited the Agnew brothers from SOCIAL DISTORTION and in 1981 released their self titled debut album “Adolescents“ which would become one of the most influential Southern California punk rock albums of all time. Along with BAD BRAINS, BLACK FLAG and MINOR THREAT they are one of the leading bands of the 1980s hardcore / skate punk scene. Over all those years the band has influenced many of today‘s later punk groups, including BAD RELIGION, NOFX, FACE TO FACE, GOOD RIDDANCE, THE OFFSPRING, PENNYWISE, RISE AGAINST, SLAYER and FU MANCHU.

Finally since 2011 the band has been more productive than ever. After their successful album from 2011 „The Fastest Kid Alive“, their great EP „American Dogs in Europe“ in 2012 and the current full length album from 2013 „Presumed Insolent“, the band is now going to release a new studio album on Concrete Jungle Records again! In July 2014 ADOLESCENTS will present „La Vendetta“, which shows once again why this group is one of the best American Punk bands these days. Songs as „A Dish Best Served Cold“, „Nothing Left to Say“ or „Let It Go“ are unique anthems, only ADOLESCENTS are able to write. 16 great new punk rock tracks combining the old and the new.