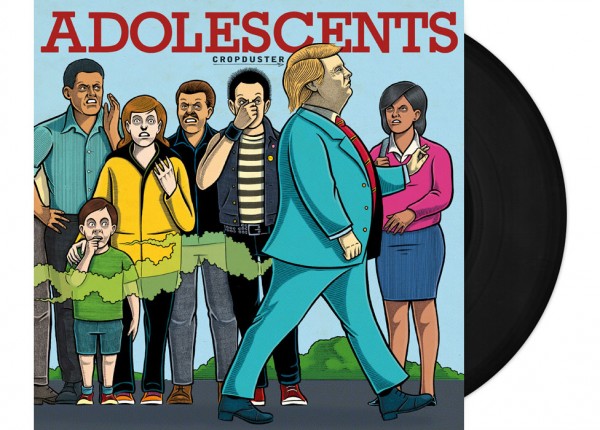 There seems to be at least one positive feature to Trump‘s presidency: While the United States are suffocating more and more in their political outbursts and the land of unlimited opportunity has turned into the country of fear and oppression, you simply want to keep all windows and doors forever shut – however, it‘s exactly in times like these that the free spirit and rebellion of the American Punk rock is more important than ever! First and foremost, it’s now up to the legendary Californians, ADOLESCENTS, to deliver an album that feels like a furious punch right in the face of all Donald fanatics. In the form of their ninth full-length record in the band‘s long career, ADOLESCENTS deliver their most angry, crushing and yet astute album.

After impressive 39 (!) years in the music scene, ADOLESCENTS have earned an undisputed reputation as one of the most renowned punk and hardcore bands in the US. After been founded in 1979 by ex-AGENT ORANGE bassist Steve Soto and singer Tony Cadena, they were soon joined by the highly esteemed Agnew brothers of SOCIAL DISTORTION and since the unleashing of their debut album in 1981, they have become an indispensable part of the hardcore punk scene. Despite numerous line-up changes and two temporary breakups, the combo has been in full action again since 2001 and this year, they once more plunge deep into our world’s cruel reality to gain inspiration for their new studio album, titled »Cropduster«. The 18-track strong invasion, available in stores in July, hits right where it hurts and doesn’t only deal with the band‘s unbridled hatred toward the current head of state of the US, but also holds a mirror to the world, in which too many stubborn people unfortunately don’t dare to look.

With playful, but yet gloomy and bitter laconicism, the band sings „Violets red and roses blue, All these things I give to you, It won’t matter when the tanks roll through“ and gives the listener a wakeup call by raging over lifestyle attitudes that many people would like to laugh at if only it wasn‘t so incredibly sad. In ‚Flat Earth Stomp‘, the band bluntly states: „Caught the flu the other day, This chick asked me to pray. Told me the earth is flat. What can you say to that?”

In ‚Just Because‘, front man Tony Cadena shouts his opinion directly into Donald Trump‘s puffy face and defends himself against his own forced assignment in ‚5150 Or Fight‘. Nothing, absolutely nothing is alright, while the burdensome ‚Nuclear Football‘ picks up on the fear of atomic destruction, and while school children have to run for their lives facing an automatic machine gun in ‚Room 223‘ - therefore the consensus of the album can hardly be expressed any clearer than that: Folks, the world is a shitty place, but let‘s celebrate our short lives before the apocalypse knocks on our door – and what‘s a better place for that than a huge moshpit, guided by the pure force of harsh riffs and raging vocals!

Even though ADOLESCENTS have passed their adolescent phase since a very long time, the quintet has always kept the rebellion of their youth alive, and combined their overwhelming power with a pinch of adult acumen, mighty explosiveness, and decades of songwriting experience. And while looking at the daily news, it seems that ADOLESCENTS will never run out of inspiration. But fear not, my friends…. we don’t have to worry much longer anymore, because in the end „We are all just prey for Armageddon.“