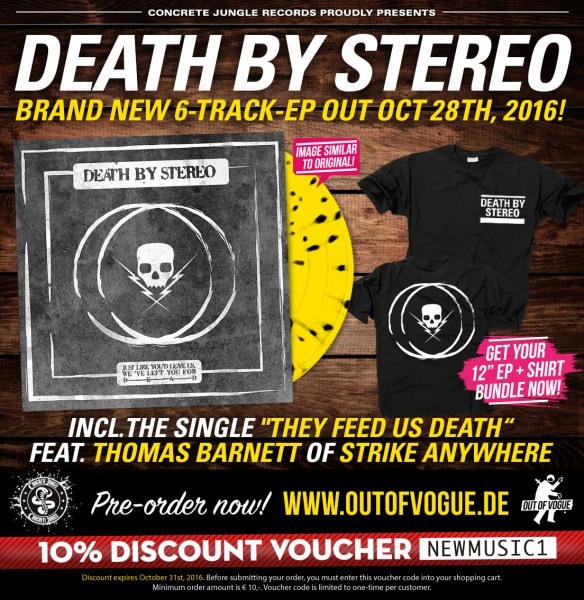 Concrete Jungle Records presents the brand new 6 track EP „Just Like You'd Leave Us, We've Left You For Dead“ by the one and only Hardcore-Punk-Metal-Mixup Heroes from Los Angeles.

Since their inception in 1998, DEATH BY STEREO - now featuring members of ZEBRAHEAD, ADOLESCENTS and MANIC HISPANIC - has assembled a worldwide loyal fan base and made a great stir with their last album „Black Sheep Of The American Dream“ in 2012 (Concrete Jungle Records). Now, 4 years later, they continue right where it ended, presenting another brilliant EP full of great Hardcore Punk riffs, interlaced with crushing Metal breakdowns and blazing solos courtesy of the legendary party shredder, Dan Palmer.

But DEATH BY STEREO is more than just music. Once again frontman and lyricist Efrem Schulz gets straight to the point and does‘t mince matters. „I think with the political / social climate the way it is right now, we need to stand up and say something with our music and take a hard stance against the powers that be. Our country is at the brink of chaos with Donald Trump running for president. "I Think About Killing You Everyday" is dedicated to him“, says Schulz.

Their song “They Feed Us Death" features Thomas Barnett of STRIKE ANYWHERE on vocals. Schulz explains, „we are all huge fans of his and really knew we had a strong bond socially and politically. The song is a death hymn dedicated to Monsanto farms and their poisoning of the food we all eat every day.“

Balancing chaos and consciousness is no easy task, and few bands will ever do it as well as DEATH BY STEREO. And somehow or another, the band does all this while completely out of their minds on Jägermeister. DEATH BY STEREO brings a conscious message with a no holds barred, uncompromising way of life that has become infamous. Death For Life! Available Oct 28th, 2016!