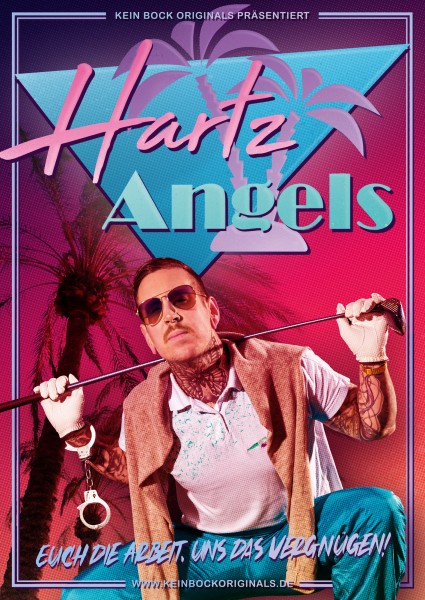 The dream of finally arrived: Can pricking and binge watching

Who doesn't dream now and then of a well-groomed tin prick for breakfast or a 24-hour series marathon in the bathtub? Ronny Rijkaard and Borris Ritter have spared no effort and committed every crime to fulfil their dream of tax-financed carefreeness and finally arrive at the bottom of society.

Now with „Euch die Arbeit, uns das Vergnügen!“ the debut album of the HARTZ ANGELS is finally ready for release. In addition to the three single releases, the record features nine more tracks, all of which move between sample-based beats and funky original compositions. In terms of content, the musicians recall their Deutschpunk roots. Because they show solidarity with all those who are left behind and at the same time they manage to celebrate the good sides of life with an almost merciless arrogance. "Our incentive was to write songs that sound poppy and yet have a political message," Ronny explains. The album is a manifesto of laziness with which rappers show attitude without pointing their finger at anyone. It is an invitation to take a short vacation into the carefree world of unemployment of Ronny Rijkaard and Borris Ritter.