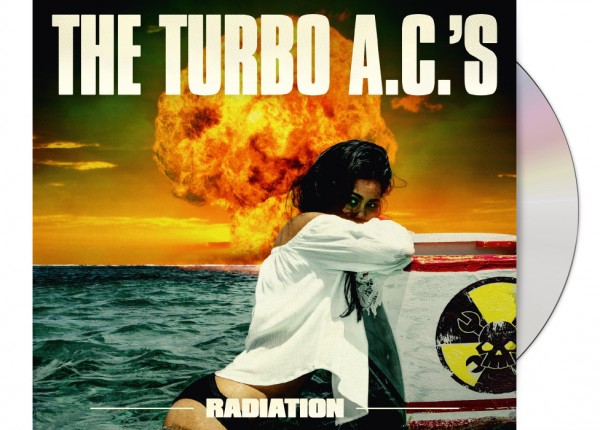 Seven years after "Kill Everyone" THE TURBO A.C.'s finally present their eighth studio album "Radiation”. The record triumphs through 13 thrilling punk rock songs with the raspy voice of frontman Kevin Cole. Another milestone in the band’s history.

Founded in the early 90s, it all started in the streets of New York City, where THE TURBO A.C.’s released a few songs and created their own surf punk sound right from the start. In 1996 they released their first full-length-album “Damnation Overdrive” on Blackout! Records. Since the international feedback was great, they started constantly touring America, Europe, Canada and Australia and made fans worldwide. The Re-Release “20 Years in Damnation Overdrive" was published on Concrete Jungle Records / Edel in June 2016.

Four years ago singer Kevin Cole made his dream come true and left New York City after 25 years behind. He moved to the island of Puerto Rico and opened a Punk Rock Pizza Shop on the beach. But that was not the end of the band. “We live in different countries”, explains the singer. “But the long distance is not a problem for us.” But then hurricane Maria hit the island and his restaurant was under water – destroyed by a storm, which made global news in September 2017. His band members started a crowdfunding campaign and raised enough money for him to rebuild the shop.

Luckily Kevin was able to save the material he already had recorded for “Radiation”. After the worst was over, he completed the new album. Seriously, who could write a better punk rock record for an angry generation than a man who stood on the brink? "Radiation" thrills with energetic songs like "Go Ahead", "All Alone", and the amazing cover of Lana Del Rey‘s song “High By The Beach”. An album that took a long time to come, but surpasses all expectations!