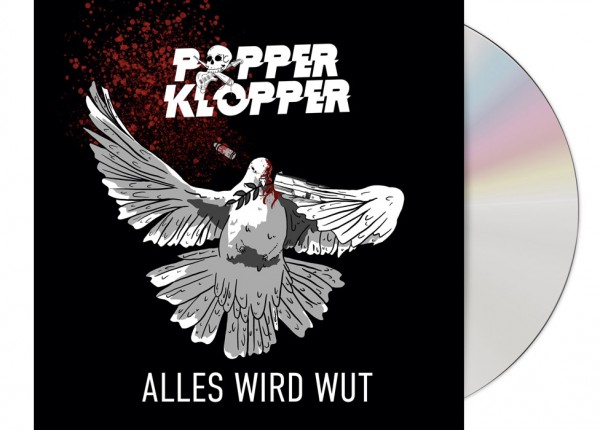 What began in 1989 with a series of grill hut parties in the southern Eifel (Germany) has manifested itself over the years as an indispensable Deutschpunk institution. Because POPPERKLOPPER have become an indispensable part of the scene. No wonder, next autumn the musicians can already look back on 30 years of band history. But let's start all over again: At the beginning of the nineties, Carsten, Helge and Lars were especially keen on bands like SLIME, CANAL TERROR and VORKRIEGSJUGEND. In 1996 they hit the mark themselves with their debut album "Kalashnikov Blues". The record gained cult status and soon POPPERKLOPPER played not only in clubs but also at big festivals like "Force Attack". "Suddenly we shared the stage with our youth heroes and even played abroad", Carsten remembers the highlights of that time. And although the first two albums convinced with uncompromising Deutschpunk songs like "Leben im KZ" and "Aufrechter Deutscher", the band never let themselves be pushed into a niche.

"At the end of the nineties we were caught by the Scandinavian Rock'n'Roll wave", drummer Lars sums up. "Since then we've been trying to bring different influences into our music without neglecting the typical POPPERKLOPPER sound. After two line-up changes on the bass in 2016, the current line-up finally came together with Udo. The joy of experimentation of the band has remained. The ninth studio album surprises with numerous songs in the typical full throttle mode, which quickly mutate into catchy tunes. Recorded with the best vintage equipment, the musicians race forward in the usual manner and provide plenty of variety on the turntable through the use of Mellotron, E-Bow and Slide Guitar. Guest appearances by friends of the scene round off the album. Among the loud guests of the birthday party are the Aggropunk colleagues of ALARMSIGNAL, FAHNENFLUCHT and MISSSTAND ("Wir sind mehr") as well as CUT MY SKIN singer Patti ("Rebel Heart"), who is also a good friend of the band.

POPPERKLOPPER remain on their usual confrontational course and denounce ongoing grievances. "It is often criticized that there are already songs on all these topics and that it is nothing new when a band takes care of current problems", Carsten explains. "But it's a fact that in many areas we're still fighting the same shit as 20 years ago. Partly the conditions have even worsened. We don't want to accept that, so in our opinion not everything is said yet". While in "Wir sind mehr" the band takes a stand against the shift to the right-wing in Germany, in songs like "Generation App" and "Kein Land in Sicht" they criticize the selfish consumer society. But also the climate change is thematized with "Nicht tot genug" and thanks to "Bomben für die Welt" the weapon lobby gets an announcement that has washed itself away. "The title of the 30th birthday record is an allusion to our birthday albums 'Alles wird gut' (10 years) and 'Was lange gärt...wird endlich Wut' (20 years)", explains Carsten. "In addition, the title 'Alles wird Wut' (Everything Becomes Rage) hits the nail on the head with the current mood in society - worldwide.