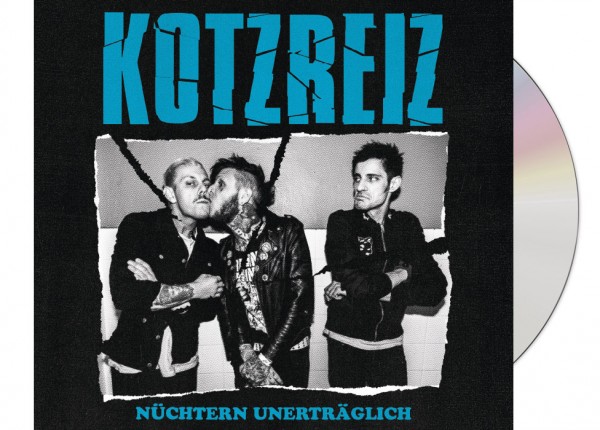 Ten years ago, three guys from Berlin stirred up the punk scene with their debut album "Du machst die Stadt kaputt" and made a big wave. Their recipe for success is as simple as it is brilliant: catchy melodies paired with a rough sound and lots of clichés. The songs, which are mainly about drinking, scrounging and puking, hit the mark with Deutschpunk fans and the Uglypunk webzine predicts a great future for them directly: "This album will most likely go down in German punk rock history." And with this the author should be right, because at the latest, when the successor "Punk bleibt Punk" is released in 2012, there is no way around KOTZREIZ. The album' s title track becomes a punk anthem and "Pfeffi Graf" causes an unexpected boom of the peppermint liquor industry nationwide. But apart from the single "Die Stadt gehört den Ratten" (2015), the trio becomes quieter again in the following years. "We all have other bands and projects," explains Chris. "That's why we took our time with the third KOTZREIZ album. But now we are back with 'Nüchtern unerträglich' ('Sober Unbearable') and we are happy to finally be able to play the new songs live!"

The fans can also look forward to this. It's all about pogoing, smooching and boozing - all night long! For Matt it will be their first album release together, but on stage the bass player has been part of the band since 2015. "Matt has played in various bands before, so our songs weren't exactly what you'd call a musical challenge for him," laughs Chris. Also the process of making the record couldn't have been more Punkrock. "As with the two albums before, we recorded this one completely at home," the drummer reports. "We don't need expensive studios or producers. Over the years Fabi has acquired extensive knowledge about recording. So we are able to record and mix everything ourselves." The punk rockers also remain true to themselves when it comes to songwriting: "When we want to write songs, the three of us always meet in our KOTZREIZ flat and enjoy some drinks. It can happen that our plans get a bit out of hand and after a night of drinking we have to realize that one or two songs were good for the trash."

Altogether 11 tracks survived the hangover the next morning and made it onto the new album. And that holds a few surprises in store. Because even if the record sounds wonderfully like KOTZREIZ and invites you to blood pogo and beer showers with short scramble pieces in the usual manner - it still has a few surprises in store. So the guys have not only added an electronic and a surf song, but also the longest song of their band history. The most personal song on the record is "Punkboys don't cry", which is about friendship and growing up. The title track "Nüchtern unerträglich" (Sober Unbearable), on the other hand, shows that Berliners can also strike serious tones. "At first glance, this may seem like a drinking anthem, but in fact it's a cry for help because the world is unbearable when sober," explains Chris. "It's just frightening how people treat each other and how carelessly they treat animals and nature." In addition there are three guest musicians on the album. Ace from ZSK contributes a nice rock'n'roll guitar solo to the title song "Nüchtern unerträglich", Emilie Krawall sings with the boys on the track "Toilettenstern" and Andrea von der PESTPOCKEN can be heard in the song "Räudiger Aal".