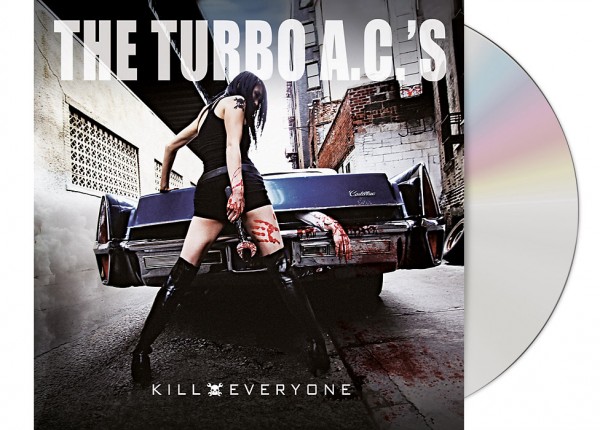 Description
Description
There is hardly any other band that combines punk rock, rock‘n‘roll and surf guitars as... more
Close menu
Product information "TURBO A.C.'s, THE - Kill Everyone CD"

There is hardly any other band that combines punk rock, rock‘n‘roll and surf guitars as perfectly as the TURBO AC‘S. For over 15 years this band around frontman Kevin Cole has delighted a growing number of fans.

5 years after their last album „Live To Win“ the four guys now present their 7th studio album „Kill Everyone“. This record is also full of impulsive and rough punk rock mixed with KC‘s unique voice and the typical lead guitar melodies that have become the flagship of the TURBO AC‘S. But the guys always find a way to refine their songwriting, create their sound even more powerful as before and thus manage to leave their previous and highly praised records behind.

„I smashed the old formula and melted down the pieces into a motherfuckin‘ chainsaw. I believe that KILL EVERYONE is breaking new ground for us but definitely still has TURBO A.C.‘S integrity“ Kevin Cole

The album titel „Kill Everyone“ of their current release runs through the songs as well as the artwork. And that‘s what makes this record so special. A great album that makes a whole lot of fun and that no one should miss. And don‘t forget: play it loud!