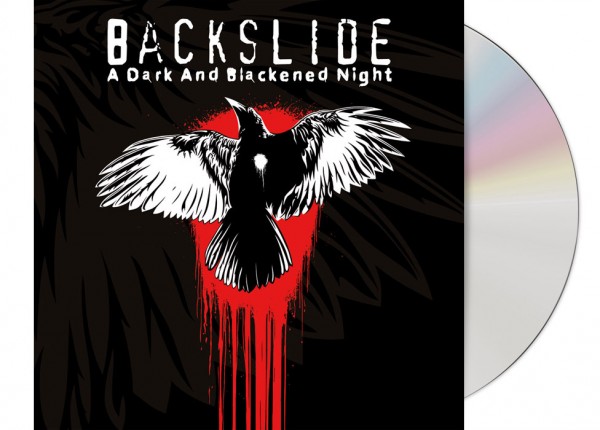 Description
Description
Ladies and Gentlemen: BACKSLIDE are back! Without a doubt, news nobody expected this year.... more
Close menu
Product information "BACKSLIDE - A Dark And Blackened Night CD"

Ladies and Gentlemen: BACKSLIDE are back! Without a doubt, news nobody expected this year. Almost ten years after their last release “Terror Age”, the band founded in 1998 in a southern German town called Freiburg, are back on track. BACKSLIDE previously released several recordings and played numerous shows at festivals and clubs throughout Europe.

By releasing their striking new album they demonstrate that they were far from inactive lately. Extremely impressive, what the four members, reinforced by Marsen Angler (Ex-FEAR MY THOUGHTS, PIGEON TOE, LONG DISTANCE CALLING), deliver. In their early years BACKSLIDE were quite successful playing Streetpunk, but present with “a dark and blackened night”, twelve melodic songs, beyond the conventional categories.

A unique, highly concentrated mix of Punk, Rock, Sleaze and Indie, occasionally reminiscent of the ALKALINE TRIO, BACKYARD BABIES or sometimes even the FOO FIGHTERS. The brute, excellent production that originated in the famous facilities of the “Sportstudio” of Philipp Rauenbusch (Ex-REAMONN), mixed by Metal Expert Christoph Brandes, raises the bar while easily keeping up with international standards. A must-have!