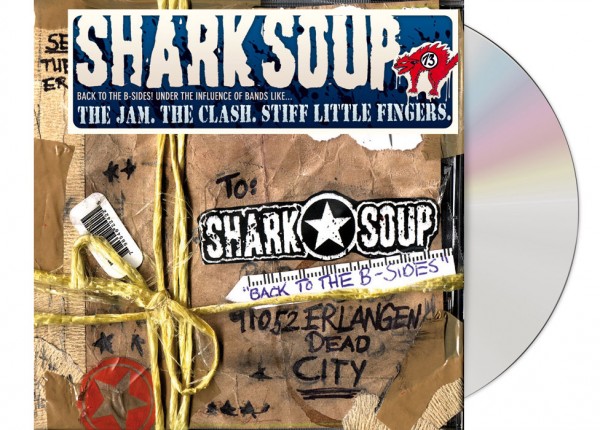 Description Evaluations 0
Description
Here´s the third strike of SHARK SOUP from Erlangen / Dead City! And we are more than just proud... more
Close menu
Product information "SHARK SOUP - Back To The B-Sides CD"

Here´s the third strike of SHARK SOUP from Erlangen / Dead City! And we are more than just proud to present you this album. Although they released their last album via BYO Records in the US and Kung Fu Records in Europe - and that record burst like a bombshell - they´ve decided to go “back to the roots”! Not only the choice of their label serves as evidence - also with the music they refer to their roots. On this CD called BACK TO THE B-SIDES (under the influence of bands like the jam, the clash and stiff little fingers) you´ll find for the first time all songs from their former band THE B-SIDES. New recordings, revised songs and a lot of that unmistakable SHARK SOUP feeling. A perfect mixture of THE JAM meets THE CLASH in a modern with a big punkrock attitude. Since the boys started the band in 2003 they´ve been playing more than 300 shows in Germany, Austria, Switzerland, England, Holland, Finland, Sweden, the US and even Australia with bands like NEKROMANTIX or TURBO ACs. And they´re not tired. On the contrary! New touroffers from the whole world are constantly available and one day they´ll also come to your town... And then be prepared coz „The Soup Is Hot! The Boys of are rockin!“